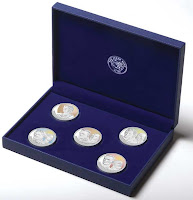 You might think calling silver a rare earth element (REE) is not a reason buy silver but there are some similarities and some important points to bear in mind which support that view.

REE are not particularly rare in fact, the 17 minerals known as the REE are actually very abundant in the earths crust. The reason for calling them rare is more related to their wide dispersal. They are not heavily concentrated in small enough areas of ore to offer economic extraction and this caused them to originally be considered rare.

Before the nineteen fifties the majority of rare earth production came from India and Brazil. During the fifties South Africa became the biggest producer. This was then followed by California in the nineteen sixties and in the eighties China became the dominant producer with 97 percent of the worlds production and has remained so ever since.

A common characteristic between silver and REE is the method of mining. Both silver and REE are mined in much the same way. As a by product of other mining activities. The cost of mining silver and REE as a sole activity is far to prohibitive. In mining one exploits the easiest first and extracts any other properties of a lower grade nature afterwards since they are more difficult and generally more expensive to extract.

However an important difference between REE and silver is that one can invest directly in silver whereas you cannot invest in REEs. Of course one can buy stocks in companies that mine REE just as much as in silver but generally such companies, again, only have silver and REEs as a by product and their stock and share process reflect activities of a more major mining processes, such as gold, copper, aluminium etc as well as other factors such as board and management decisions regarding the company and its overall production and direction. The stock price is rarely ever affected by the production of REEs or silver even.

Silver, additionally, is in the unique position of being both a major industrial as well as a investment asset, and I am including coin production in the investment class for the purposes of this dissertation. This gives silver a singular rarity not enjoyed by other metals other than gold to a minor degree (Gold is used in industry and other areas such as medical field but compared to the total gold product is extremely minor).

It should also be noted that silver stock piles world wide are down over ninety percent since the 1940s. That is a tremendous decrease in available silver. When you consider that the demand of silver in industry is increasing as well as the demand for silver investment it becomes increasingly apparent that silver is, indeed, a rare earth element and a justifiable reason therefore to buy silver.
Posted by Michael Moore at 9:00 PM