The True Value of Silver 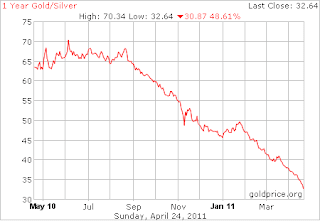 "Silver looks set to outpace gold in the coming months with the current shortage becoming more and more pronounced."

"Silver should be trading at 128 dollars an ounce, adjusted for inflation since 1980 and probably would be except for the manipulation of the silver price by four major banks, including J.P. Morgan. This despite enormous investment demand from exchange traded funds (ETFs) and booming coin sales."

The ratio of gold to silver was, at that time, over 40 to one. The accompanying chart shows the dramatic plunge in the ratio between gold and silver.

In addition silver production is not expected to grow in 2010- 2012 with the supply side of the coin expected to remain bullish. Silver, unlike gold, gets used up and only five percent of silver produced is ever recovered and recycled.

According to the consultancy firm, CPM, 12 billion ounces of silver existed way back in 1900. Since then, that figure has plunged to only 680.9 million ounces in 2008, according to the Silver Institute (latest figures available). So over the last 110 years we've seen a massive 94% drop in above-ground supply. That's an alarming drop in global stocks.

In 2008, global silver mine production grew by a paltry 2.5% representing the 6th year of consecutive output growth and 77% of total supply for that calendar year. Peru once again ranked as the largest silver-producing nation in 2008 followed by Mexico, China, Australia and Chile, according to the Silver Institute. Peru produced a total of 118.3 million ounce of silver in 2008 or 17.4% of total world production.

The world’s largest silver/lead/zinc mine is BHP Billiton’s huge Cannington Mine in Australia. This mine produces around 7% of the world’s supply of primary silver. This mine produced only 38.4 million ounces of silver in 2010 when silver revenues were approximately $400 million (more than 40% higher).

Silver is now at the cusp of a major rally the like of which has not been seen for many a year. Silver is now outperforming gold and this is likely to continue as the short positions become more and more intolerable for the four big banks, including J.P. Morgan. The largest U.S. bank, which acts as custodian for SLV, or the iShares Silver Trust on the NYSE, is also rumored to hold a massive silver short position of 200 million ounces. That statistic alone, more than any other variable and worth more than the entire production of Peruvian silver in 2008, cast a shadow on major resistance at $20 an ounce.

But, like any elastic stretched too far, the forces of supply and demand will has snapped back and overwhelmed the short sellers resulting in silver breaking the $20.78 an ounce prior ceiling and now reaching those dizzy heights of $45 plus per ounce as they did in the 80’s when the Hunt brothers tried to corner the market.
Silver will easily reach 50 dollars an ounce in the next few weeks or even days, and 128 dollars an ounce can now be seen in the distance.

The true value of silver is right on our doorstep it seems.
Posted by Michael Moore at 9:18 PM No comments: